Fuller;25339226 schreef:Tesla sells many cars, but consistently does so at a loss. Is this a sensible business plan? I suppose anyone can sell more units at a loss, depending on how much of a loss you're willing to accept. How long can they continue to consistently lose profit until the honeymoon is over and investors decide to sell out while there's still something to sell? Everyone eventually has to pay their debt, regardless of what they promise for the future.

GrussGott;25339407 schreef:Well, it's a "yes" from Tesla's investors (see below) but let's try a quick thought experiment:

You and I build an car company from scratch and in 5 years we're beating entrenched competitors 3:1 and beating Porsche on the Nurburgring. Should we pack it up or raise money and keep going? If you wanted to pack it in, I'd buy you out, but unless you're a complete idiot you wouldn't. (note that no company in the history of automobiles has ever done that .... except Tesla)

In any event, here's the opinion of Tesla's investors the market: 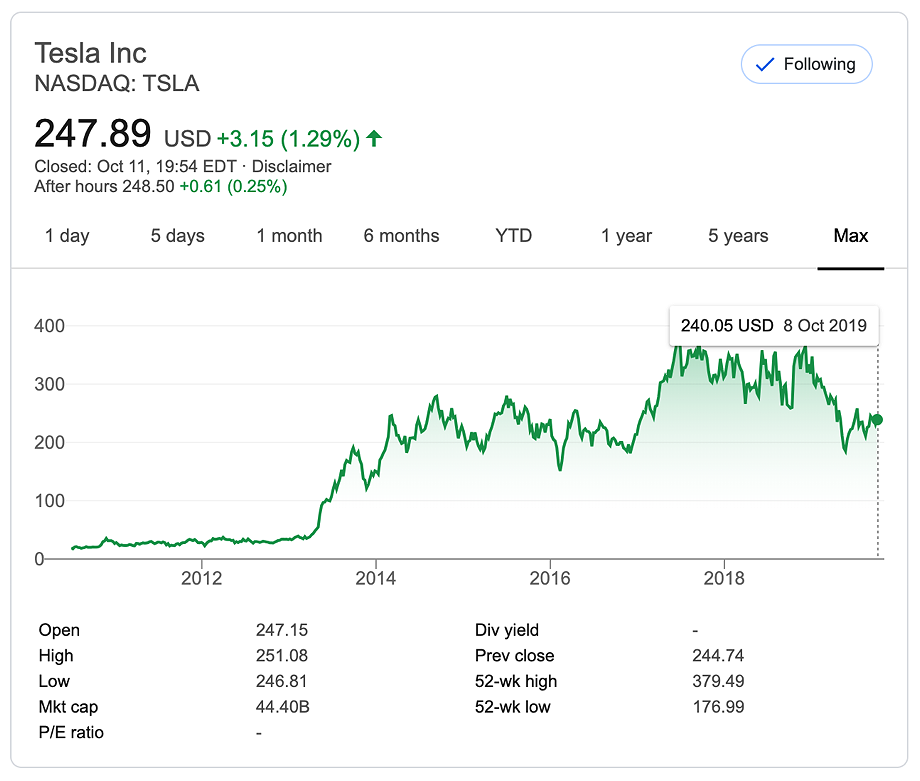 (note: i'm not in TSLA, never have been, won't be, and will likely not ever own a Tesla)


Fuller;25341083 schreef:Eventually investors will realize that there's a cap on pure EV growth. Much of the infrastructure in the US, let alone the rest of the world, isn't amenable to unlimited EV ownership. There's variation in lifestyle, commuting requirements, living arrangements, among other circumstances that still present obstacles to EV ownership. How long will it take to change this? Will infrastructure and cultures around the world continue to change at a quick enough rate to accommodate the growth needed to sustain a company like Tesla, or will sales eventually plateau? Even with government incentives, and the growth and investor interest they currently generate, they can't seem to turn a profit very often. Should they continue riding the wave until it crashes? Of course, what other option do they currently have? It doesn't mean that other manufacturers should emulate that model. Like another member posted earlier, bmw doesn't necessarily need to match Tesla's current sales numbers.

It's worth noting that BMW and others are currently investing in EV technology, and their profits are taking a hit, at least partially due to this, however, they're still in the black. The difference is that bmw, along with other auto makers, haven't placed all of their eggs in the risky, high performance, luxury EV basket.