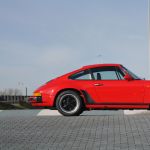 With extraordinary access to one of the country's most secretive companies, this shows how Formula One racing team McLaren is now building a road car using some of their F1 technology. During the summer of 2011, McLaren launched the MP4-12C. It is claimed that this 168,500 pound super car is one of the most cutting-edge and glamorous machines ever built and shows British design and precision engineering at its best. The programme goes inside the McLaren factory, meets the team of engineers and McLaren boss Ron Dennis, and discovers how the car has been designed, tested and built from scratch, including its unique carbon-fibre 'monocell' technology and its engine - the first the company has ever built. Plus the film finds out what racing drivers Jenson Button and Lewis Hamilton think about the car and there is a look at how its sound was created in a studio. (Stereo, Widescreen, High Definition, Subtitles).

Spotted here under a large amount of camouflage, is the next supercar out of Woking, codenamed the P12. Under the shell of this prototype is an updated version of the MP4-12C's carbon-fiber chassis, made from a combination of carbon fiber, titanium, and magnesium. Power is expected to be generated from a radically updated version of McLaren's 3.8-liter V-8 and will be be backed up with the Formula 1 derived kinetic energy recovery system (KERS).

Total output is still unknown but we can safely expect somewhere in the region of 900hp.