Eagerly anticipated and making its official global debut at the British Motorshow in London on July 22nd, the first all-new car from Lotus since the iconic Elise in 1995, will enter the sportscar market as the only mid-engined 2+2 in production.

The new car, which is known only by its project name ‘Eagle’, is a more holistic offering than the Elise and Exige models that have been so massively popular with track day enthusiasts. The car, the name for which will be announced at the British Motorshow on 22nd July at an 11:30 press conference, is designed for people who desire exotic sportscar characteristics of stunning design, exclusivity, dramatic proportions and performance. Project Eagle also offers real-world usability and a unique sense of occasion. Powered by a 3.5-litre V6 producing 280 PS, the new car employs innovative lightweight chassis technology to ensure visceral all-round dynamic performance, in keeping with the great Lotus tradition.

Even in the very early stages of development testing, Lotus ride and handling engineers report that it is considerably faster around the famously demanding Nürburgring circuit than the Elise and more stable at speed than the Exige. Inside, Project Eagle cocoons occupants with a sumptuous leather surfaces juxtaposed with contemporary high-tech features. With driver focused instrumentation the driver sits in cockpit-esque surroundings. A beautifully appointed dash boasts tactile details such as flush-mounted controls that glow with blue LED haloes and a stylised speedometer and rev counter ensuring that controls are both attractive and accessible.

Styled in-house by Lotus Design, the Project Eagle’s sleek, sophisticated and attention-snaring lines brilliantly disguise its ability to accommodate passengers in the rear of the cabin, giving the car the external characteristics of a small, nimble sportscar whilst belying its internal space. As well as being sold in a 2+2 configuration, the car will also be available as a purely twoseater, the space in the rear being allocated to luggage storage. Other derivatives are also planned for the future, including a convertible and an ultrahigh performance version.

Deliveries of Project Eagle will begin in Spring 2009, and with only 2000 of the hand crafted cars planned each year, this exclusive and unique car is creating a real stir with celebrity enthusiasts around the world. Hollywood actor and car enthusiast Patrick Dempsey is just one of the high profile collectors who are on the waiting list for a test drive.

Mike Kimberley, CEO of Group Lotus plc, had this to say about the new model: “Project Eagle is the biggest milestone Lotus has achieved since the Elise was born 13 years ago. We are currently working at broadening the appeal of the Lotus brand through an aggressive 5-year model plan of which this car represents the first exciting step.”
Laatst gewijzigd door Stéphane op 28 aug 2008, 23:55, 1 keer totaal gewijzigd.
Omhoog

Technology
In a world launch by partners Alpine, Project Eagle boasts a truly cutting edge in-car entertainment and navigation system. The multi-media system features a 7in touch-screen providing advanced audio, satellite navigation, Bluetooth hands-free telephone and iPod® connectivity functions; the screen also serves as a monitor for Project Eagle’s optional reversing camera. The satellite navigation element of the system has a removable hard-drive, allowing you to programme it from the comfort of your home or use it as a roaming satellite navigation unit and MP3 player.

The Alpine audio set-up is one of the most sophisticated automotive systems in the world. Called IMPRINT and using MultEQ sound enhancement technology, it is able to cancel out imbalances in the sound caused by different areas of the cabin – window glass, for instance, creates echoes, while carpets suppress mid-range frequencies – resulting in amazingly crisp, clear, undistorted sound reproduction wherever you are seated in the car. A bespoke progressive air-conditioning system developed by Bergstrom is standard on all models, while on-board tyre pressure monitoring will be either standard or optional depending on model and market. And in deference to the American market in particular, a module in the headlining will accommodate automatic garage and gate opening remote controls.

a grown up Exige? 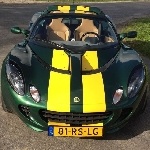 As well as being sold in a 2+2 configuration, the car will also be available as a purely twoseater, the space in the rear being allocated to luggage storage.