The Miura came into the world as a chassis, and was first presented at the 1965 Trino Salone dell'Automobile (Turin Automobile Show) in November. That the reception was immediate and overwelming is not hard to understand. At that time the mid-engine layout was new; it had taken hold as the chassis of choice in various European racing classes, and had recently been introduced to fans of the Indy 500. As a road car, while not unheard of, it was rare; as a high powered road car it was nothing short of revolutionary.

The Miura, without a body or even a name, as it was introduced to the world at the Turin Auto Show. The photos below clearly show an exhaust system whose details had yet to be worked out. Above left, the radiator is mounted in a last minute, let's put it here fashion. Also: this is the only time the factory put wire wheels on a Miura. Despite these humble beginnings, the exotic car world would never be the same.

With a hit on their hands, Lamborghini now needed to clothe their new chassis. They chose Bertone, a firm with the ability to design and manufacture car bodies. Nuccio Bertone gave the plum assignment of designing the body to 25 year old Marcello Gandini.

The body was designed while Giampaolo Dallara worked on chassis development, and both came together in early 1966. The complete package was presented to the world in March 1966 at the Geneva Auto show. Also revealed was the "Miura" model designation, named after a breed of Spanish fighting bulls. It was the hit of the show. There was also a promise of production and, despite skepticism, the orders came in, (10, according to one account) more in fact than were expected. Demand would never be a problem for the Miura; in fact supply was always limited by the factory's ability to produce.

Ferrucio Lamborghini was a showman with a flair for promotion and he saw the Miura as a way to generate publicity for the other cars he produced. The angle worked, as sales of all Lamborghini cars improved with the introduction and presence of the Miura. Initially he thought of the Miura as only a flagship car and planned for a production run of only about 30 examples.

This fact is important as it explains a lot about the Miura. Since it was seen only as a temporary and very limited production model, it was initially not well developed. The Miura constantly evolved during it's production life. Even though there are three distinct Miura models, the P400, the S and the SV, the changes were phased in gradually with some of them being applied to cars before or after their upgraded designation. Some of the changes made a good thing better, while others corrected mistakes that perhaps should not have been sold to the public. When production ended in 1972, the car was well sorted out, but it was a gradual process.

The Miura went through a number of changes, before the first car to be sold (with a manufacture date of March 1967) was produced. The battery was moved from the central frame tunnel to the front compartment. The model designation was P400, with the "P" short for "Posteriore" a reference to the engine location, which was behind the driver and 400 was short for 4.0 liters, which was the engine displacement. The chassis, which was a deep section steel platform using spot welded construction, was made of .9 mm steel for the first 125 cars and 1.0 mm. for all subsequent cars. The Miura used suspension parts found on the 400GT wherever possible. The rack and pinion steering was Lamborghini built and designed.

It isn't easy to use the words "practical" and "Lamborghini Miura" in the same sentence, but when you talk about access for servicing, they do go together. The Bertone design included clamshell opening for both the front hood and the engine compartment that hinged at the ends of the car. The two major body panels, made of aluminium, were easily removable for major servicing. The transverse mid-engine design allowed for two luggage compartments, although they did not add up to a significant amount. The doors and the main body section were made of steel.

The Miura body was not developed in a wind tunnel, which was an unobtainable luxury for small Italian car makers in the 1960s. Most accounts give the Miura good marks in the aerodynamics department, with only minor lifting or "lightness" of the front at the highest speeds. Various techniques helped, although some reports indicate that it was always a Miura problem. Much of the Miura development was in the hands of Bob Wallace, a New Zealander with excellent credentials as a race car engineer and a test driver.

Development of the Miura was constant throughout it's production life, and the first model designation upgrade, "Miura S", "S" stood for "Spinto" appeared in December 1968. Changes to the engine in the form of larger intakes and different combustion chamber were part of the improvements.
The factory claimed a horsepower increase to 370 hp (from 350 hp) but knowlegable sources indicate it was really much less.
They also got chrome treatment on the windshield and window frames as well as the surround rings on the headlights.
The changes were not consistent, and later in the production of the "S" constant velocity joints and ventilated disc brakes were fitted.
Upgrades in the rear suspension also appeared.

The final Miura model - the SV - made its debut in March 1971 at the Geneva Auto show.
The improvements were many and went a long way towards delivering the true potential of the design.
Nobody argues that an SV is the ultimate Miura and the marketplace confirms this with a giant jump in the price of currently available Miura SVs over their predecessors.
Contributing to the situation is the fact that only (approximately) 142 Miura SVs were built.
The rear suspension was upgraded, with revised wishbones giving it a wider track.
The result was less twitchy, more predictable handling.
The rear wheels, at nine inches, were wider and shod with new (for the era) 60 series Pirelli tires.

Modified cam timing, carburetor changes and enlarged intakes boosted the engine output to 385 HP @ 7850 rpm. More rigidity was designed into the front and rear portions of the chassis; similar changes are often incorporated when older Miuras are restored.
Some (but not all, as is often thought) of the SVs received the quite valuable "split sump" treatment, seperating the lube system between the transmission and the engine. A few SVs were equipped with a limited slip differential.
Lamborghini ended production of the Miura SV when it built s/n 4822 on October 12, 1973. Just over 750 Miuras were built.

Most car models end their production run when demand ceases, but this was not the case with the Miura. By all accounts they could have kept selling it as buyers were still eager. But Lamborghini had a worthy successor waiting in the Countach and their limited manufacturing facilities could not accomodate two models. The Countach continued the Miura tradition and also became an exotic car banchmark, setting new standards in styling and technology. It further revolutionized drivetrain systems with a mid engine layout (this time in line) with the tranmission in front of the engine. The Countach succeeded wildly, becoming a high end icon in the eighties. But it all started with a small group of ambitious young engineers with a dream called the Miura
Omhoog

I used to stop by his house occasionally to see the car. It was kept outside in his carport and would get pretty dirty. One day I brought over a bucket and supplies and washed and waxed the car. I never asked or told anyone, and when the dirt accumulated after a month or so, I did it again.

After a few months the owner discovered me washing his car. He had been wondering who the mystery cleaner was, and he was very nice about it. He took me out for a short ride (my first) and let me drive it back. I was trilled and terrified at the same time. I’ll never forget it.

"I was hesitant about buying it because even though it was considerably less than a running Miura (which could be had for $25,000 to $35,000) i" 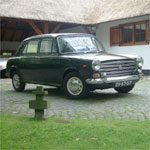